Swim over the sandy bottom of the upper reefs of most areas, and you will likely see a group of fish feverishly working their way across the sand rooting into the bottom. When diving at West Caicos in the Turks and Caicos Islands at Rock Garden Interlude and those sites to the north, clouds of sand can be seen being dispersed in the fishes’ efforts to locate small invertebrates hiding under the sand. Most of these rooting fish are goatfish.

Goatfish are members of the Mullidae family. There are four species found in the Atlantic—spotted, yellow, red, and the dwarf goatfish. All goatfish have two appendages under the tip of their chin, called barbels, which can be retracted into a groove under the throat when not in use. These barbels serve two purposes. They are loaded with highly developed taste cells aiding in the search for food, and they are used to dig in sand and around areas of rubble to locate well-hidden invertebrates. Goatfish have small teeth on the roof of their mouth and in the lower jaw used for crushing.

Yellow goatfish are slightly larger than spotted goatfish reaching a maximum of fifteen inches with the average being six to twelve inches. Yellow goatfish have also been recorded in all depth ranges from five to two hundred feet deep. 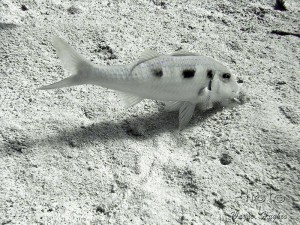 Spotted goatfish, when actively feeding, are normally white with a row of three dark, rectangular spots running along the side of the body. Light bluish lines may extend from the head down the length of the upper body. When resting or inactive, the white base color and dark body spots vanish to become a mottled reddish brown allowing them to blend with their background on the reef. Spotted goatfish are common in Florida but are only reported occasionally in the Bahamas, Caribbean, West Indies, Gulf of Mexico, and south to Brazil. On some dive sites, like Whiteface on West Caicos, they are more abundant and may be seen in small groups of two or more.

Yellow goatfish are white with a yellow tail and a yellow mid-body stripe. As seen on the photos, they may have blue shading on the edge of the yellow stripe. The nose may be reddish. With the exception of the tail, all other fins are white or light yellow. Yellow goatfish are quite common throughout Florida, Bahamas, Caribbean, Gulf of Mexico, Bermuda, and south to Brazil. The yellow goatfish may feed alone or in groups of up to twenty. When not feeding, they often swim in large schools over the nearby reefs as depicted here. 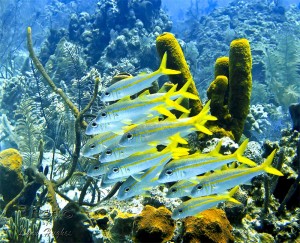 Both spotted and yellow goatfish appear unconcerned with divers and will generally allow a close approach allowing divers to observe their foraging efforts. All goatfish feed primarily on invertebrates and, in turn provide food for graysbys and other groupers. In some areas they are also highly prized as a food source.

Many fish, including goatfish, have traditional spawning areas on the reefs where hundreds of fish may congregate. Goatfish are considered to be “resident spawners” with their local spawning areas only a few hours away. This group spawning increases the possibility of egg fertilization and may also limit the predation of the eggs. Even though they are classified as resident spawners, goatfish also pair to spawn.

When you make your next dive on the reefs around Providenciales and West Caicos, keep your eyes open for these interesting fish working their way across the bottom or swimming over the reef.