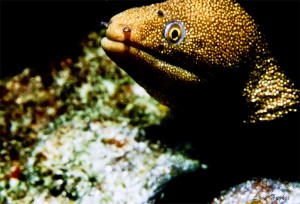 Our underwater world is an amazing and wondrous place for all divers, but it can appear especially mysterious and alien to a newly certified 11-year old. One such young diver recently asked me after a scuba dive, “Is the brown snake we saw hiding in the coral poisonous?” I had to smile as I remembered my very similar reaction many years ago when I encountered my first moray eels. Fortunately, we don’t have sea snakes in the Caribbean, so there is no reason to panic if you are new to the reefs there! This young diver was fortunate to have seen one of the many species of eels found on the reefs around Providenciales, Turks & Caicos Islands–a small Goldentail Moray. 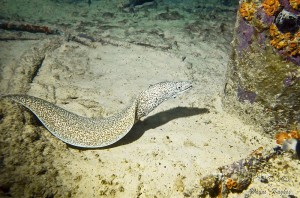 There are 14 species of morays in North America. Moray eels, while resembling snakes, are really fish. While most fish have obvious pectoral fins, ventral fins, and scales, moray eels do not. Most fish also have distinctive and separate dorsal, tail, and anal fins, but on a moray these fins are merged into a long continuous fin beginning just behind the head near the small, round gill opening, continuing the length of the body, around the tail, and extending midway back up the belly. With a thick, leathery skin, the eel’s body is muscular and quite flexible allowing easy access to small openings in the reef. The body is covered with a clear, mucous layer to protect it from burrowing parasites. Morays have extended tube-like nasal openings on the end of their snout giving them an excellent sense of smell. This highly developed sense of smell is very important to a predator with extremely poor eyesight. 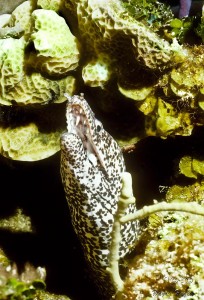 Most species of morays have powerful jaws and mouths equipped with numerous sharp needlelike teeth with an additional row of teeth angled slightly backward running down the center roof of their mouth. This configuration aids in catching and holding prey. Some species have grinding teeth rather than needlelike teeth.

Spotted moray peeking out of hole

In order to breath, morays must constantly move water through their gills. This requires them to continuously open and close their mouths, making them appear quite threatening to a new diver. While morays can move quite rapidly when distressed or feeding, they are not aggressive unless baited with food or molested. During the day, most morays tend to hide in reef openings with just their heads or tails visible. Most only come out in the open to forage for food at night. However, two species, the Goldentail and Spotted Morays, hunt primarily during the day. Morays stalk or chase their prey and are, therefore, called roving predators. They are also piscivores, a carnivore that eats primarily fish, but their prey also includes crabs, octopus, small crustaceans, and occasionally even other morays. 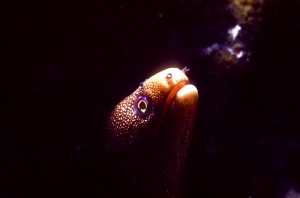 The Goldentail Moray averages eighteen to twenty four inches long while the Spotted Moray may be over 3 feet long. Both are found in depth ranges from 5 to 50 feet preferring shallow to mid-range coral heads.

Identification of morays is fairly easy due to their distinctive colors and markings. The Goldentail Moray’s body is brown with small yellow spots, the tip of the tail is normally yellow to gold, and the eyes are ringed in yellow. Occasionally, a reverse phase color pattern moray is seen with a yellow body and brown spots like the small Goldentail often spotted on Sunday Service off West Caicos. 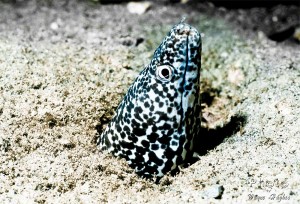 The Spotted Moray is yellowish-white above and white or yellow on the bottom, with tightly spaced, irregular, brownish to purplish-black spots and blotches. They also occasionally show a reverse phase pattern with a dark body and white spots or blotches. Both the Spotted and Goldentail Morays are common throughout the Caribbean, western Atlantic, and the Bahamas but uncommon elsewhere. 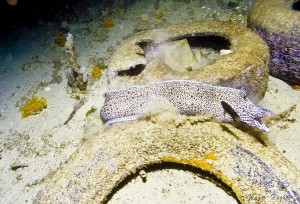 Even though they have drastically different color patterns, they both rely on camouflage to blend with the surrounding coral. As a result, they often go unnoticed by divers and appear unconcerned when divers are near. If approached too closely or molested, they simply withdraw into a reef crevice disappearing from sight. 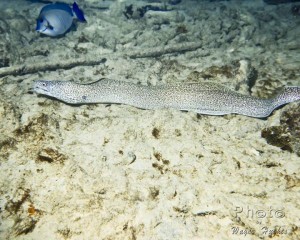 Some sea bass, primarily Graysbys and Conies, hunt with Goldentail and Spotted Morays, to increase their odds of capturing prey. One to four fish will follow the moray as it moves from crevice to crevice in pursuit of concealed prey in a feeding behavior known as nuclear hunting. I have witnessed this hunting pattern at both West Caicos and French Cay. While the eel searches the interior of a coral head, the fish cover the escape routes waiting for prey attempting to escape the eel. Even though Graysbys and Conies are typically shy, they can be closely approached when they are hunting with an eel.

On your next dive, look closely at those Conies sitting around the reef, and you may also discover an eel in close proximity. If you are fortunate, you may even witness an eel’s run between coral heads. And when that new diver asks about sea snakes, just smile, and remember your first sighting of an moray eel.