Have you ever noticed that you can dive the exact same area several times and see something different each time? What you see often depends upon your frame of mind. On one dive you may hope to see big creatures like sharks, turtles, or rays and so concentrate on looking out into the blue. On the next dive, you may decide to look in all the holes in the coral and under ledges and, therefore, concentrate on looking for smaller things. It is that type of dive that often leads to some of our most fascinating discoveries.

As you are swimming over the reef, you spy a tiny spotted thing attached to a sea fan. While this intriguing creature blends in with the surrounding hard and soft corals, it still vividly stands out to the observant diver or snorkeler. But what is it? You have just spotted one of the gems of the sea, a mollusk named Cyphoma gibbosum, better known as a Flamingo Tongue.

Flamingo Tongues are in the Phylum Mollusca, Class Gastropods, and Family Simnias. Gastropods, or snails, make up the largest and most important class of mollusks, and include more than 80,000 species of which about 60% are marine species. In the Turks and Caicos Islands marine gastropods include some very important species like conchs, whelks, and tritons.

Gastropods do not have a true skeleton, and with the exception of the shell-less snails, enclose their soft bodies within a spiral, cone, or cup shaped shell for protection. The head of the snail consists of a proboscis mouth and two tentacles with the eyes at the base. Look closely at a conch on your next dive, and you can easily see the mouth and eye stalks peering out at you. A muscular pad, called a foot, allows the animal to move across the bottom. A leathery skin mass, called the mantle, covers the head, foot, digestive, excretory, circulatory, and genital organs.

When a Flamingo Tongue is active, its creamy white mantle extends out from the bottom opening of the shell onto and over the shell for camouflage. The mantle is covered with numerous yellowish orange rectangular, oval, or oblong spots outlined in black. When inactive or if touched, the mantel withdraws exposing the glossy shell beneath. 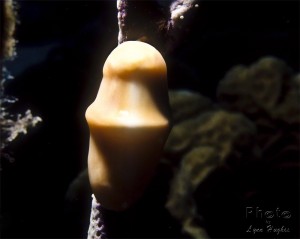 The animal’s diet and the water conditions, including salinity and pollution, determine the color and pattern of both the shell and the animal so each shell will be unique.

Flamingo Tongue shells range from ¾ to 1 ¾ inches long. The calcium carbonate shell and its glossy finish are both secreted by the mantle. The shell is elongated with blunt rounded ends and has a raised ridge running from side to side across the center of the shell. The shell is yellow, pink, or a reddish cream with a white patch in the center and white around the edges. It has a long, narrow, smooth opening at the bottom of the shell where the animal’s body emerges.

While easily overlooked by divers and snorkelers, Flamingo Tongues are quite common and can be found along the east coast of the United States from North Carolina to Florida. They are also common in Bermuda, the Bahamas, throughout the Caribbean and the West Indies, and as far south as Venezuela and Brazil.

Found typically in depths from 6 to 45 feet, but as deep as 120 feet, Flamingo Tongues once formed large colonies on Caribbean reefs, but they have been seriously over collected in nearly every part of the Caribbean.

Flamingo Tongues live on and feed on soft corals, sea whips, sea fans, and gorgonians. While usually only one or two will be seen on a gorgonian, occasionally groups of seven or eight may be found. They lay single eggs, and the young emerge as free swimming larvae called veligers. The veligers feed on suspended food particles in the water as they are carried by the tides and currents far from their place of origin. During this larval stage, many will become food for filter feeders like rays, bivalves, and corals, and other pelagic animals. After several days, as the growing shell becomes too heavy to float, the veliger will drop to the ocean floor where it will start its life as a bottom crawler. Once the Flamingo Tongue becomes a bottom crawler, it then becomes a food source for crabs, octopus, grunts, porgys, triggerfish, hogfish, spiny puffers, and permits maintaining the reef’s food chain.

So the next time you go snorkeling or scuba diving keep you eye out for these amazing gems of the sea. You might be surprised just how many you can find once you start looking. The Bight Reef, the Grotto on Grace Bay, Magic Mushroom and Coney Island on West Caicos, and Tons of Sponge near Sandbore Channel are all good places to look. And don’t be surprised if you are lucky enough to find a shell that looks like the Flamingo Tongue, but with a mantle with fingerprint type markings—the Fingerprint Cyphoma. Ah, but that is a story for another day! Good hunting!